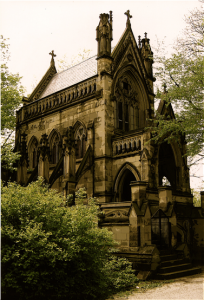 As the third-largest cemetery in the country and the largest in the state of Ohio, Spring Grove Cemetery is known for its sprawling scope, gothic architecture, and of course, stories of the paranormal. Chartered in 1845, the cemetery has housed Cincinnati’s dearly departed for nearly two hundred years, including the remains of notable Cincinnatians from Civil War general Joseph Hooker, feminist and abolitionist writer Frances Wright, and even the founder of the Kroger grocery stores, Bernard Kroger. Since its pre-Civil War establishment, the cemetery has expanded to match Cincinnati’s sprawling size, and although its architecture remains deeply classical alongside the contemporariness of the city, its undeniable beauty and impressive scope earns it a reputation as one of Cincinnati’s most definitive features, as well as a spot among its most haunted.

Spring Grove Cemetery’s classical elegance traces its roots to the grandiose rural cemeteries of Western Europe and the contemporary Northeastern United States. When the Cincinnati Horticultural Society formed to charter the cemetery in early 1844, they drew particular influence from the Pere Lachaise Cemetery in Paris, France, and the Mount Auburn Cemetery in Cambridge, Massachusetts. The name Spring Grove arose, rather obviously, from the generous amount of both springs and groves found within the rolling green hills of the cemetery grounds. By late January of 1845, the Cincinnati Horticultural Society had officially chartered Spring Grove Cemetery. On September 1st of that year, the very first burial took place. What would normally be a morose occasion strangely emanated an air of celebration, as the first soul enjoyed the honor of being laid to rest in what would soon become one of the nation’s largest and most beautiful burial grounds.

Ten years later, Spring Grove acquired much of the characteristic landscaping it’s known for today. Renowned landscape architect Adolph Strauch drew up intricate plans for ornate stone fountains, placid lakes, carvings of angels, and lush greenery such as trees, shrubs, and flowers including the stunning pink blossoms of the Eastern redbud trees interspersed throughout the grounds. Strauch soon gained international recognition for his work at Spring Grove, and to this day the cemetery is widely acknowledged as one of the most beautiful in the nation. By 2007, Spring Grove had landed a coveted spot on the National Register of Historic Places, and the rest is history.

Amidst the classical gothic beauty of Spring Grove Cemetery, with its intricately carved stone angels and church-like mausoleums, the horrendously tacky stone bust of Charles Breuer sticks out like a sore thumb. The head, neck, and shoulders of the late real estate mogul are positioned in the center of the large obelisk rising above his grave, giving Charles full view of his final resting place. His stone face is characterized by a fluffy carved mustache, sagging jowls, and a tiny snub nose, making him appear more like a pug than a man. But undoubtedly the most defining feature of the bust is the pair of frighteningly realistic eyes peering out from its dog-like head. Many visitors have claimed that the eyes of Charles Breuer follow them wherever they go, and others even claim the eyes are real. Whatever the case, the bust is certainly not a sight for sore eyes.

One visitor of the haunted Spring Grove Cemetery tells a particularly hair-raising tale involving the bust of Charles Breuer. According to his report, the visitor was strolling through the graveyard just before nightfall. The cemetery was just minutes away from closing, but the visitor decided he still had more to see. Ignoring the hours posted on the front gate, the man continued on down the path, whistling as he walked. He stopped in front of the tall white grave marker bearing the eerie yellow eyes of Charles Breuer.

The man claims that the eyes seemed to be watching him, but even creepier, they seemed to recognize him as an intruder. Refusing to let Charles impede him on his forbidden tour of the grounds, the man turned to leave when suddenly —and he swears by this—one of the eyes popped out of Charles’s head and landed on the ground beside his foot. The eye then turned itself all the way around to gawk up at the man, squelching wetly as it moved. Feeling a little too seen, the man decided to cut his tour short right then and there. He claims to have returned to Spring Grove the next day to see if his eyes had deceived him, only to find the eye securely back in its place. Had he imagined the whole thing? But upon closer inspection, the man could just barely make out the faint, glistening trail of goo where the eye had landed, like a ghostly snail trail or an ectoplasmic x-marks the spot. It seems as though Charles Breuer succeeded in ensuring the man never disobeyed the rules of his scared resting place ever again.

Undoubtedly the most terrifying tale of all to come out of Spring Grove circulates around the Dexter family crypt, a private mausoleum tracing its roots back to the 1860s. Framed by gnarled, spectral trees that seem to remain black and leafless all year long, the gothic style crypt looks like something out of a horror movie. Its secluded cliffside location certainly doesn’t help abate any creepy feelings either. More disturbing still is the crypt’s interior. Wide stone steps lead up to the open structure lined with shelves of tombs housing generations of the Dexter family dead. Standing inside the dark, chapel-like structure where the light never quite seems to reach, it’s easy to see why it’s inspired so many scary stories. And while you may feel brave enough to take a peek inside during the day, venturing into the crypt at night is an entirely different story.

One night, a pair of young teenagers made this unfortunate mistake. The two had been hanging around with a group of older boys who made a habit of hazing their younger friends, consistently daring them to do impulsive, often dangerous deeds in the name of proving themselves. On this particular night, the group happened to be walking by the cemetery when one of the older boys dared their young followers to hop the fence and enter the infamous Dexter family crypt. The boys refused at first, until the older teenagers conceded that if the pair completed this final task, they would never be hazed again and would finally be accepted into their group. This offer was too good to pass up, and the boys agreed.

After checking and double-checking to make sure no one was watching, the two scaled the tall metal gate surrounding the cemetery and set off down the winding path toward the crypt. Everything was dark and still, and the first chill of winter began to creep through the air as they walked. Soon, the two came across a hulking gothic structure that could only be the Dexter family mausoleum. They stood outside the black hole of the entrance, neither of them wanting to be the first to venture inside. “You go first,” said one. “No you,” said the other. Before they could argue any further, a devilish growl emerged from the darkness. The two exchanged a panicked glance and were just about to turn tail and run when something stopped them in their tracks.

From out of the mouth of the crypt crept a pair of snarling white dogs, their eyes aglow with blue fire. One of the dogs threw back its ghostly head and let out a blood-curdling howl. That was more than enough to send the two youngsters running for the hills. But not before one of them could pluck a pink flower from the branches of the Eastern Redbud tree growing just outside the mausoleum walls. The vibrant pink souvenir from inside the cemetery coupled with the frightening tale the boys had to tell forever cemented their status within the group, and the two were never hazed again.

If you have the privilege of traveling to the beautiful city of Cincinnati, Ohio, try your best to drag your friends and family to Spring Grove Cemetery. Sure it may be among the creepier attractions the city has to offer, but if you’re a true fan of all things wicked, then Spring Grove Cemetery is an absolute must-see. Just be sure to look away before nightfall.

Top 10 Haunted Places in OhioLocated in the Midwestern region of the United States, the people inhabiting the great state of Ohio more than uphold its reputation as one of the politest, well-m...
Read More