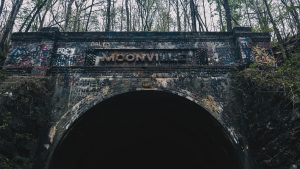 Located in the Midwestern region of the United States, the people inhabiting the great state of Ohio more than uphold its reputation as one of the politest, well-mannered states. And the undead residents are no exception, as the ghosts of Ohio seem to be rather polite and unassuming. Among their ranks are the ghosts of a family who died in their sleep, the spirit of a conservationist writer, and the apparition of a woman who refuses anyone offering her a ride.

But be warned that further down on the list, you might encounter spirits who left manners behind in the last life. These unfriendly phantoms have opted instead to spend eternity tormenting the living, and include ghostly inmates, demonic energies, and even a portal to Hell. If you think you’re brave enough for what Ohio has to offer, read on.

Malabar is a historic landmark located in Ohio State Park, Lucas, and the former home of Pulitzer Prize-winning author and conservationist Louis Bromfield. You can tour the grounds as well as the farm’s main house, but be on the lookout for old Louis and his many furry companions.

Volunteers working at the house report hearing strange, unexplained sounds such as a chair being pushed away from a desk in the room Louis occupied, even when no one is upstairs. Other accounts detail odd smells coming from upstairs, and some visitors have even reported feeling unseen cats brush up against their legs. The spirit of Louis Bromfield has been spotted sitting by the window in his old bedroom, perhaps still struggling with a bad case of ghostwriter’s block.

Put-in-Bay is a quaint little town on South Bass Island on the appropriately named Lake Erie. The town is quiet and beautiful, making it a popular vacation spot for tourists, many of which would never guess its creepy history.

In the late 18th century, a smallpox epidemic ravaged the county. A young man named Samuel Anderson became overwhelmed and depressed by the death and disease that surrounded him, and took his own life by jumping from a cliff by the lighthouse. Visitors touring the area sometimes hear the sound of something splashing in the water. When they look to see what’s making it, nothing is there. Other visitors touring the lighthouse report hearing footsteps creeping up the stairs and doors slamming shut on their own.

Even without knowing its history, the Moonville Tunnel sends shivers up the spine. Located deep in the woods, the tunnel is framed by a faded stone archway covered in moss. The tunnel itself is long and extremely dark, swallowing up the light from each opening.

The tunnel is actually an out-of-work stretch of railroad track that leads to an old coalmining town. If you’re brave enough to venture through it, you might see the ghost of Frank Lawhead, an unlucky train conductor who met his end in a head-on collision with another train. Visitors to the area have taken photos with their camera or phones, only to look back at them later and notice the pale figure of a man they didn’t see before, or phantom train lights blazing at the end of the tunnel.

The hulking form of Patterson Tower looms over Hills and Dales Metro Park in Kettering, Ohio. Massive and made of stone, the tower more closely resembles the home of an evil witch than anything you’re likely to find in present-day Ohio. In fact, it even has a nickname: Frankenstein’s Castle. And while Frankenstein may not lurk here, local legend holds that a teenage ghost named Peggy Harmeson does.

According to the story, Peggy and her friends snuck out to the park one rainy night when lightning struck the tower, killing her instantly. Her spirit seems permanently linked to the rain, and they say every time it storms her ghost appears. Visitors of the tower report hearing the screams of a young girl in bad rainstorms, and others report seeing a ghostly face peering down at them from the tower’s peak.

A far cry from London, England, the city of London, Ohio is just north of a dense forest, located at the corner of Old Xenia and Roberts Mill Roads. Deep inside these woods sits an old abandoned barn that is so rotted away it has practically melded back into the trees. It is here that the ghosts are rumored to linger.

If you ask anyone from the area, they’ll tell you that these woods are haunted. According to the story, a family of five was traveling through the woods in the late 1890s, when they were stopped and killed by a band of thieves. Those brave enough to wander through the woods of London at night have reported hearing gunshots and disembodied screaming. Others have felt a sudden drop in temperature before seeing a strange white mist hanging in the trees.

Originally opening (and locking) its doors in 1889, the Licking County Jail is now home only to prisoners serving afterlife sentences. Its spiral turrets and castle-like exterior invoke the same sinking feeling in the pit of your stomach that the prisoners who first marched up its steps must have felt. The inside isn’t much better, with stacks of cramped, grimy cells lining its abysmally lit halls.

Since being put out of commission, the jail has become a notoriously haunted hotspot and a must-see for any paranormal enthusiast. While it was operating, a total of three sheriffs and 19 inmates died on the premises. If you make your way to Licking County Jail, be sure to peer between the cell bars, as the spectral figures of prisoners are said to peer back. Some visitors even report hearing strange, howling cries echoing through the halls.

Considering nothing remains of the house that once stood here, it’s no surprise the empty expanse of burnt grass off State Route 29 is among the most haunted places in Ohio. The small plot of land is flanked by two large cornfields and marked by a walkway of trees. The family who once lived here was killed by a fire that ravaged their home as they slept.

Drivers passing the lot on nights when the moon is bright claim they can see the shadowy outline of a house at the end of the trees. Others driving by report smelling smoke. By far the creepiest stories involve drivers speeding along the freeway by the house only to spot the badly burned figure of a young girl in the headlights. But by the time they hit the brakes, the girl has vanished.

The only road in Ohio more haunted than State Route 29 is undoubtedly Van Wagener Road in Oak Run Township. According to legend, a young woman was murdered by her jealous husband in a home just off the road.

Drivers passing through report spotting a young woman in a bloody white nightgown asking for help on the side of the road. When they stop to help her, she wrings her hands nervously and refuses to get in the car. Feeling creeped out, the drivers report the incident to the police, who have become completely overwhelmed by similar reports over the years. Though her body was recovered from a well on the property, the woman’s husband was never charged with her murder.

The Sedamsville Rectory is a historic Cincinnati building that once served as a home for the priests of Our Lady of Perpetual Help Church. Priests of questionable moral character were rumored to live here, including a man who was moved around considerably before retiring from the priesthood, leaving some to believe the Church was covering up his tendency to torture animals. His fellow priests later confessed to hearing strange sounds coming from his bedroom and feeling ‘uneasy’ in his presence. As the alleged site of the abuse, it’s no wonder the place is host to some wicked demonic energy.

Reports detail strange, howling cries, and deep scratches appearing in the flesh of workers. The current owner of the building, Terrie Scott, even claimed that she was pushed by an invisible force. The presence haunting the rectory is so evil that a priest was called in to perform an exorcism. But his efforts did little to keep the demonic energy at bay, and whatever monster lurked in the rectory still remains.

Built in 1850, Bobby Mackey’s is said to be the most haunted nightclub in America. When it was first built, the building served as a slaughterhouse and meatpacking facility. The standard for most slaughterhouses of its day, the facility featured a well to collect the runoff of animal blood, innards, and other waste. If that image wasn’t icky enough, there have also been several murders in and around the club throughout the years.

The place harbors energy so dark that a portal to hell is rumored to swirl somewhere within its basement. Hauntings include strange, suffocating heat, a trashcan flying through the air, and the apparition of a man with a handlebar mustache appearing in the mirror.

The state of Ohio has so much to offer, and whether you’re attracted by the polite reputation of its citizens, or intrigued by the juxtaposing dark energy of its dead, there’s no doubt this state is a must-see for any enthusiastic ghost adventurer.

Top 10 Haunted Places in OhioLocated in the Midwestern region of the United States, the people inhabiting the great state of Ohio more than uphold its reputation as one of the politest, well-m...
Read More
Loading....